ESGE Days 2021 – the event went virtual, but it stayed real!

ESGE attendees entered an incredibly immersive virtual event platform where they could explore a theater, with six tracks streaming live content, an Exhibit Hall with industry booths, a Networking Lounge where Meet the Experts and EYE Zone sessions were held, plus much more. 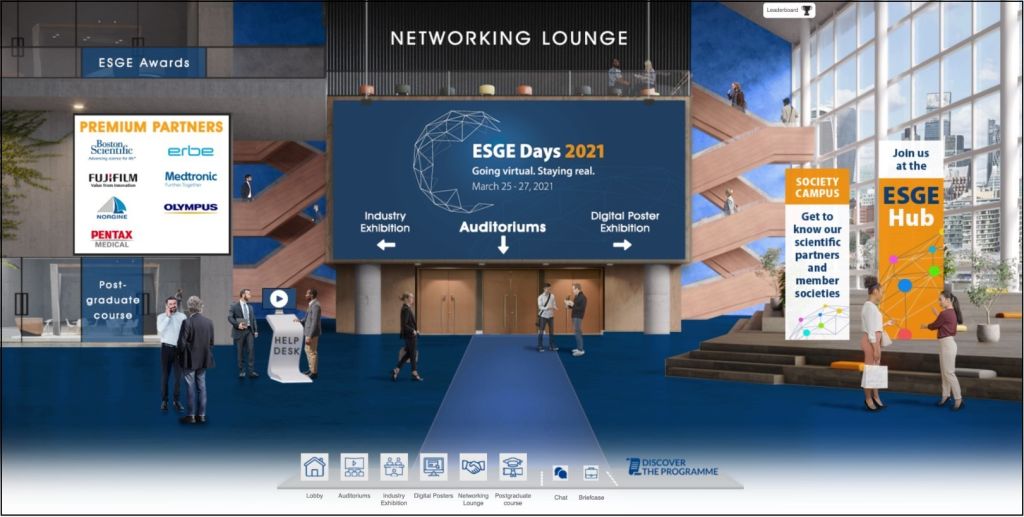 There were 3,024 registrations, an increase of 222 participants from ESGE’s last face-to-face congress in 2019. Participants were mainly Gastroenterologists/Endoscopists (91%). There were over 140 scientific sessions and 234 poster sessions.

Scientific posters was the key focus of the virtual event. 781 abstract submissions were received from 53 different countries.  Four investigators had their abstracts selected as the top poster, and presented their work in the opening plenary session, plus 60 investigators were awarded a poster Grant.

Alongside the scientific program and industry symposium, a number of award winners were also announced and honored during the virtual event. Short videos were created about the winners of both the ESGE Innovation of the Year Award and the ESGE Medtronic AI Research Award which were screened at the Awards Hub.

The Live Endoscopy sessions, which were streamed all day on day two, which had the highest attendance over the three day event.

ESBE chose Communique as their virtual event hosting platform because of its amazing custom design capabilities, engagement features and full support for setting up and during live days. “One of the reasons we decided to use Communique was that we wanted to have a premium solution –not just any virtual event. We can run virtual events by using Zoom or any other tools and call it a day. But we wanted to have something outstanding and state of the art,” commented Dinis-Ribeiro.”